Early Training: Secret To Our Success

Many Olympic athletes start training at a remarkably young age to develop the skills, conditioning, and mental fortitude necessary to compete at the highest levels. Studies have shown that early neurological stimulation from the age of 3 days though 16 days has important lasting effects on the performance of dogs and other mammals.  We use a program called "Bio Sensor" (also known as the "Super Dog" program), which was developed by the U.S. Military to improve the performance of working dogs. Over-stimulation and stress can have detrimental effects on young animals, but these gentle exercises, which do not occur naturally in the early period of life, are thought to "jump-start" the neurological system earlier than would normally be expected, resulting in increased brain capacity that will improve the dog's ability to cope with problems and stressful situations down the road.

Benefits of Stimulation:
Five benefits have been observed in canines that were exposed to the exercises:

The Young "Olympians" are pleased to demonstrate the five exercises, each of which lasts for only 3-5 seconds and is designed to stimulate the neurological system:

1. Tactile stimulation - The handler gently stimulates (tickles) the pup between the toes on any one foot for 3 - 5 seconds:


2.  Head held erect - The pup is held perpendicular to the ground with its head is directly above its tail.

3. Head pointed down - The pup is reversed and is pointed downward so that it is pointing towards the ground.

4. Supine position -Pup is held with its back is resting in the palm of both hands with its muzzle facing the ceiling.

5.  Thermal stimulation—use a damp towel that has been cooled in a refrigerator for at least five minutes.  Place the pup on the towel, feet down.


In general, however, life is pretty relaxing for the young athletes here in the Olympic Village. Typical daily regimen:  Wake up, eat, poop, sleep, nap, look for mom, eat...etc. 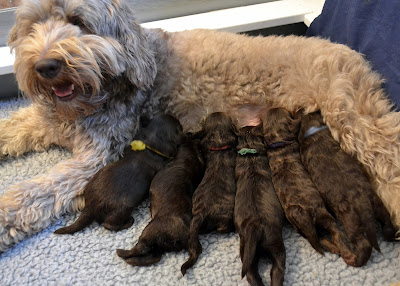 Posted by Kristin at Golden Gate Labradoodles at 7:50 AM