Doing What Lola Does Best...

(...besides retrieving tennis balls, that is!)

Lola's sacrifice and dedication to her puppies is remarkable in that she clearly enjoys her babies like nothing else on earth (including retrieving tennis balls!)  She lines them all up between her paws (on the heated warming tray, which cannot be that comfortable with her luxuriant fleece coat) and she gazes at them adoringly... Posted by Kristin at Golden Gate Labradoodles at 12:00 PM 0 comments

Lola let us know unequivocally what she had in mind for the day through her persistent efforts to lure all her family members (canine and human) to attend her in constantly changing potential whelping locations.  She varied between several attractive venues that we had created for her such as under a small table with a sheet tented over the top, a large dog kennel filled with luxurious bedding to shred, and of course the super expensive ultra-deluxe sanitized professional heated whelping box.  However her lair of choice, which required some considerable effort to dissuade her from, was the dirt, beetle- and and humus-filled hollow which she had surreptitiously dug out under the rusty wheelbarrow and old ladders in the backyard, under the deck.)

As it was, this first little chocolate girl made her appearance at about 2:30 PM in the tented boudoir, but waited it out on the heated warming tray in the whelping box until her next sibling was born. 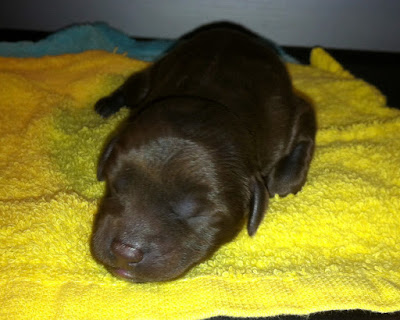 Posted by Kristin at Golden Gate Labradoodles at 11:12 PM 0 comments

We are so excited to welcome this beautiful girl to our breeding program!  After spending some "quality time" with Whitney snuggled on my lap, it was with a pang of reluctance that we introduced her to her new Guardian family, where she will be even more-loved!  We expect Whitney's next litter this summer! 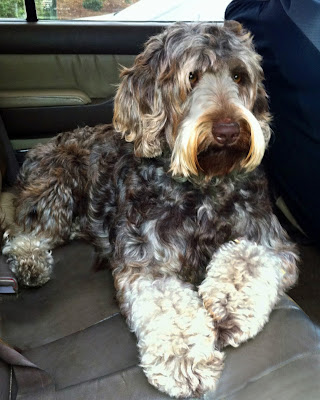 Posted by Kristin at Golden Gate Labradoodles at 12:31 PM 0 comments

"Joey" is a gorgeous chocolate-cafe standard, originally  imported directly from one of the founders of the breed Rutland Manor in Australia. His parents are the legendary "Cool Dude" (Read about this remarkable dog HERE ) and the celebrated Rutland's Kismet.  Thanks to Hudson Labradoodles in New York, Joey has come out to provide us with an opportunity to perpetuate this unique authentic Australian Therapy/Service Dog line out West. 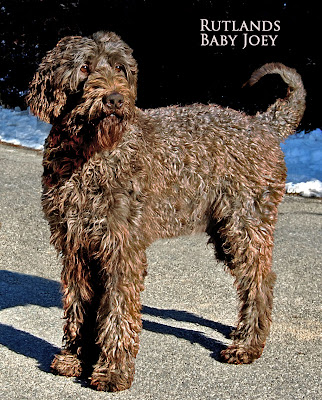 Joey will be co-owned with Elizabeth Ferris at Country Labradoodles and will be available on a limited basis to other breeders (Australian lines only). Joey's most recently-sired litter was born in December 2011 at Hudson (eight gorgeous puppies). We look forward to seeing Joey's laid-back temperament, goofy sense of humor, and special Therapy/Service Dog heritage in his future offspring. Please contact us if you are interested in these classic Australian lines for your program. (Joey has just had all of his Health testing re-done in 2012.)

Posted by Kristin at Golden Gate Labradoodles at 12:53 PM 0 comments

Here we seem to have beat last year's tally for the highest number of Labradoodles we can get to pose our holiday picture!  All the Best to Everyone from Our Family at Golden Gate Labradoodles! 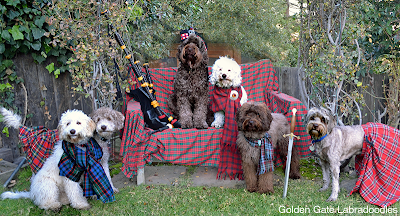