Kiki and Bailey are proud to announce the birth of their 10 new puppies. The midterm ultrasound did show a full house, but not this many! Ten pups is remarkable in-and-of -itself, but even more remarkable is that there are 9 girls in this litter!

We were ready for Kiki to go a couple days early because of so many puppies, but she was only a day ahead of schedule. 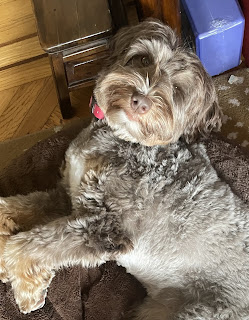 Bibi, our dedicated resident “Labra-doula” alerted me with her constant vigilance next to the whelping box that it was happening soon.

Miss Kiki kindly started the process in the afternoon, which is much less arduous for the humans involved! (Many dogs hold back all day long, even though they could whelp earlier, just until it starts to get quite dark when they instinctively feel safer from predators.)

Kiki is a first time mama and we never know how young females may react, but given her grandmother and great-grandmother’s experiences, I was not surprised that she took the surprising (to her) event very naturally.

Everything went smoothly and extremely quickly for the first several hours, with the first five puppies born in just under an hour and a half. Two sets of two puppies were actually born at the same time (!) and both Kiki and I were kept busy stimulating them to take their first breaths, severing the umbilical cords (me with hemostats and surgical shears and Kiki in the traditional way), cleaning them up, and getting them latched on to nurse. 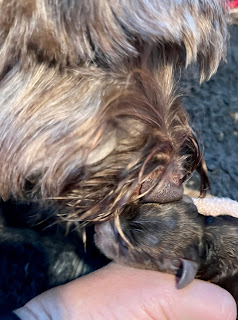 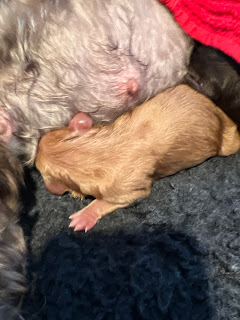 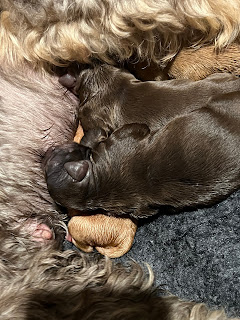 After the first 5 pups, Kiki was treated to a bowl of French Vanilla ice cream, for some glucose, calcium, and fluids. She also had another bowl after puppy number nine! 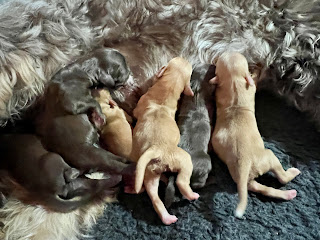 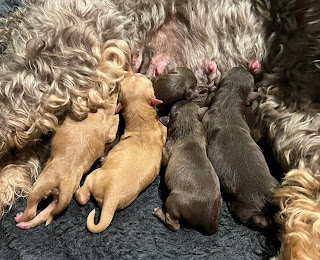 The last puppies to be born have a lot further to travel from up under the rib cage. The placentas detach with the mother’s contractions and if it takes too long for them to be expelled to the exit, we are always concerned that their individual bubble will run out of oxygen. (Major Tom to Ground Control…). Sure enough, puppy number nine was smaller than her siblings and born limp and inert. It took a few anxious minutes, but brisk rubbing of her chest and back, wrapping her in a warm taco of the heating pad, and giving her breathing stimulation by accordion movements, resulted in her taking shallow gasps on her own. We monitored her closely in a warm isolette for an hour however before she was breathing weakly, but somewhat normally. It’s always an uncertain outcome with weakened little ones, but all of a sudden she started to peep and squeak! As she began to move fairly vigorously and would not stop the racket, I felt comfortable putting her with her siblings. What a loud stink she made! And she would …not…be…silenced. This one wants to live…and to EAT! We were able to put her on a nipple but Mama’s milk had not come in yet! Just then, number 10 surprised us by popping out! Also small, but fully breathing and otherwise normal. We were able to supplement number 9 and 10 with some puppy nutrition gel just to give them a little energy boost until we could move them in to get their shares of colostrum.

(At this point there was an all nighter keeping an eye on the two tinies and ensuring they were not pushed off of the teats, or squashed by tired mama…Zzzz… The first few days after Whelping can be pretty brutal for both the mama and the humans.)

Next day, everyone is doing great and all ten tinies are vigorously nursing. Mamas milk came in! 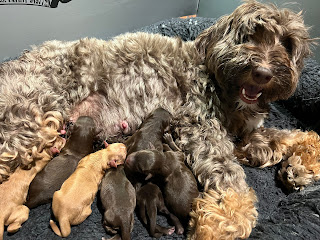 Posted by Kristin at Golden Gate Labradoodles at 6:07 PM